Things to do in the Village

Anyone Home?: We were a few people short of fielding up to three engines. Luckily we were able to shuffle some people around, myself included, to get them fielded. The scenario dictated: once an engine was destroyed, or couldn’t be operated (too few engineers) that the engineers cannot move. Well then, OK! But if we are to keep and engine running, a ballista for instance would best be served by having 4 engineers so if one died, there is a replacement. Some people only want to fight with their unit. That’s OK as well, but if you’re open to moving, and you have more than enough people, consider moving to a new home for a bit. The greater glory and honor will be served in keeping your team alive as opposed to just your squad. 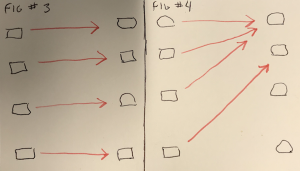 Targets of Choice: In some cases, being smart about targeting helps. A larger hit zone, proximity, obstructions. But I want to talk specifically about unceremoniously ganging up on people. Referring to fig. 3,4 we can see the concept of ganging up on one or two targets. Thereby increasing the hit chance. This can take targets out more quickly and reduce the return fire. This combined with position, can be brutally effective. 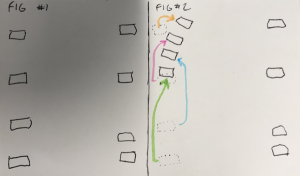 Field Position: “Nobody move! Maybe they wont see us!”… and so it was. Not one engine moved. It seems to me that if there is one line facing another line, moving engines to increase the distance from opponents, while maintaining good distance to others whom your teammates are targeting is a good thing. Moving out of their range? Even better! Referring to fig. 3,4 we can see the concept. Move your engines if possible. During set up, engines that can’t move put them in a safer position. In this case we had an elevation advantage. If we had moved engines to the top of the hill, they’d have to shoot uphill effectively reducing their range. Then combine this with fire concentration… again, brutal.

Rules: There are rules, then there are scenario restrictions. This can be in the form of increased safety zones, etc. Now scenario or Kingdom rules can augment, but not replace, or reduce Society law (eg: reduce safety ranges). But important things to note are thing like, if a ballista bolt is moving, am I dead? According to Society rules, once a bolt touches the ground then hits you, you are not dead (section VI). This happened to my team.

Swords to Plowshares: It has happened before where as a combat archer, I have put my bow aside and stepped on to a siege team to keep the engine running. And vice versa. Being aware of your surroundings and communicating need can sway a battle BIG time.

Wrapping up: Not trying to write a novel, just a few observations from the field, and I hope it helps!

Friends, here we are. The forming of an amazing night. Through the grace of the Kingdom of Atlantia, do we, your humble servants, bring you a night of festivity, culture, music, and amazement.
We will have an assortment of activities for your pleasure.
SCA Medieval Barter Town will be present with a trading bazaar starting at 6p. Come share, and trade with your populace!
6:00 – ‘Great Atlantian Camel Race’ hosted by our friend Brad Fisher! If you have a hobby camel (horse) to race, bring it! Get there a little early to register your steed or dromedary!
Musical perfomances:
7:00 – Kylie Hilali ‘Moroccan Madness’ a presentation of amazing Belly Dancing performance with special guests.
7:30 – DragonSong an amazing group if you havent heard them, now is the time! I always love their shows!
8:00 – Melissa Murphey and friends, and in this case, friends, is YOU! come bring your darbukas, saz, oud, ney, whatever, and help make this an event for the record books! Dancers of all levels and style are welcome!
“Beer from Alain!” Our good friend Berry Williams will have two taps from our good friend. We heard a rumor he will have brewed something ON SITE!
A hookah will be available! If youre a hookah master and want to help run it, let us know!
Are you a henna artist? We will have cones thanks to Glaukos and we can set you up with a space!
Glaukos Athenaios will have a coffee bar and will be brewing the best coffee and refreshment available
Thursday night friends. This will be a night to remember, Atlantian Nights. Bring your good times, and your laughter too. We’re gonna celebrate and party with you!
If you have something you want to share re: Near/Middle Eastern Culture, Arts and Sciences let us know! There may be a competition, but you dont have to participate in that aspect, we want you to share your amazing ‘thing’!
Request space or sign up here! We want YOU to shine and share the culture and experience!
I can’t stress enough how much love and dedication will be poured into this event, for you… the populace of the known world.
Share it with us, share a world we all can know better, a welcome and learning environment, from our heart to yours: Atlantian Nights – A Taste of the Near East.

Greetings friends one and all!

This year at Pennsic we are pleased to announce at least one meeting regarding the Valiance Proposal (Omnibus Peerage). We will be meeting at the Thrown Weapons tent on the main battlefield at Sunday August 5th at 5:30 pm. Scheduled for one hour depending. Look for the banner!

This will be an open forum to discuss any issues or concerns about what the Peerage aims to achieve, walk each other through the process, or simply answer questions.

Our last large meeting was very productive. We had an array of positions on the proposal and discussed them openly. Very civil conversations and all voices were welcome.

This is the environment we want to foster this year. Bring your thoughts and concerns, or simply listen.

This Society is made great by those that care for, and nurture it.

Read a review of how our last meeting at Pennsic went!